A couple of months back I did a blog post demonstrating how you could modify the source code of the extension library designer tooling, to allow your own plugins to make contributions to the Theme selection drop-down.

I also posted a feature request to the Extension Library Project on OpenNTF, I quickly got a response from Gary Marjoram that they were already thinking about this and to keep a lookout for future releases.

Well the IBM team have just released Release 9 (R09) of the 9.0.1 Extension library and I am happy to see Gary has included his fix for this in this release. Here is the text from the Readme.pdf file within the release download:

So I thought I better check this out! I downloaded and installed ExtLib 9.0.1 R09 to my Domino Designer.
Then I made the necessary changes to my bootswatch themes ‘fragment’ plugin as follows:

An then implemented the getThemeIds method. This is the method which the Xsp Properties editor will use to get the list of contributing themes 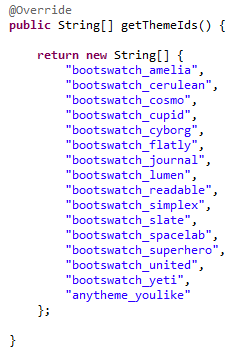 Then Installed this new plugin to Designer, restarted and it worked a charm 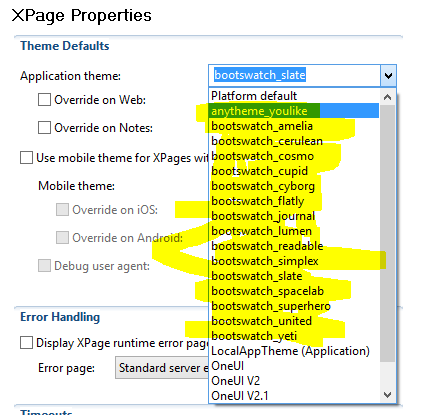 To verify I selected ‘anytheme_youlike’ and saved, then inspected the actual xsp.properties file
and it is as expected.

So I would like to say thanks a lot to the IBM ExtLib / Designer Team for this, I think that the Bootstrap4XPages project will definitely be happy about this too!